Harrison’s eyes permanently widened around food the first time his older cousin Mitch “cooked” for him. Harrison was four. Mitch scooped ramen out of a pot, discarded the broth and placed the noodles inside a folded piece of white bread. Harrison was confused, but happily indulged. Before finishing, Mitch pulled a pail of Meadow Gold ice cream out of the freezer, placed a scoop inside another piece of folded white bread and handed it to Harrison for dessert. “What is happening?” Harrison thought. As he devoured his “ice cream sandwich” he concluded, “huh, sometimes when you put two things you love together you can really like what comes out of it.” It was the first time he realized uncertainty could lead to excitement.

Harrison grew up in a home with 25 relatives – A Filipino palace, as he calls it. The kitchen produced the sounds of salted fish and tortang talong sizzling in the morning and steam wafting from bubbling pots of sinigang or chicken tinola in the evening. As a kid he devoured books, often opting for a Christopher The Mouse science book over going outside to play. “ I was such a curious kid,” Harrison said. “I would always ask ‘why’. … It was the chance as a little kid to break down and tear apart what’s beautiful. … If you can understand something’s constituent parts, then you’ll find that there are more mysteries in each part and the journey in being able to create comes from being able to put together what you know.”

Harrison began his restaurant career at age 16, after his high school cooking class teacher presented an opportunity to work at Le Bistro in Hawaiʻi Kai. Out of the eight students that auditioned, Harrison got the job. The kitchen was intense. Harrison was in awe of the way the cooks communicated and seemed to dance so effortlessly together on the hot line. He learned to satiate his curiosity by watching instead of asking questions. “If you wanted to learn it you had to earn it,” he said. It was here where Harrison set a 10-year goal to become a chef.

Harrison was also a spoken word poet in high school, competing nationwide. He eventually became a poet facilitator for Pacific Tongues – a non-profit that cultivates youth literacy and civic engagement through writing and performance of spoken word poetry – teaching youth statewide from Punahou School to the University of Hawai’i. Despite his award winning poetry performances, Harrison didn’t believe he was as good at transporting his insights through language as he was at transporting them through food.

“I didn’t do all the proper things for language that I did with food,” he said. “To me, the poets who have the most lasting quality are the ones that are able to know how to properly use language, as in, they’ve done all the foundational stuff. They’ve written the essays … they tried the sonnet … they found out what worked. They learned how to critique other people’s writing … I never did that work with poetry. I told myself that when I become a chef I want to be able to do what great poets do with their words with cooking.”

After working at Hula Grill, Koko Head Cafe and Cafe Kaila – where he excelled as an egg cook – Harrison decided he didnʻt just want to cook; he wanted to master the art of cooking.

When Senia announced its opening, Harrison jumped at the chance to work under three of Hawaiʻi’s highest-level chefs: Chris Kajioka, Anthony Rush and Patrick Collins. Here, he learned how to hustle and problem-solve for himself. Patrick taught him new philosophies and a different way of understanding food. Seeing Harrison’s curiosity and hunger to learn, he began giving Harrison samples of what he was working on for his opinion, not revealing what they were until after Harrison gave a thoughtful critique.

“Patty was my most treasured mentor there,” Harrison said.

“We were just runts,” he said. “Me, Kenny and John. It was me trying to get a grip on making dishes. It was hard learning what it was like to start leading, creating and putting yourself out there. I did a lot of overthinking back then. Felt like we were three kids trying to make good food, but not knowing anything. … Have you ever seen Pokemon Tangela? That’s how it feels like my mind looks. Ideas are always flowing. I can’t help the associations. How to anchor one idea into another one, combine flavors, textures. The hard part is sitting down and choosing which direction to go in. The team helps me decide. I bring it to them and based on their reactions I’ll go a little further.”

Three years later when Kenny and Harrison opened AV Restaurant, Harrison became corporate chef de cuisine of XO Restaurant Group, overseeing the menus at both XO and AV. Known for his creativity, he says it’s all about intention and getting flavors to present in the way he wants them to.

“The same way a poet might be able to have a cluster of words, an intention or a message be what they want it to be,” he said. “And when the words leave their tongue and the line is written they look back at and they go ʻhuh, that said it better than I thought it was going 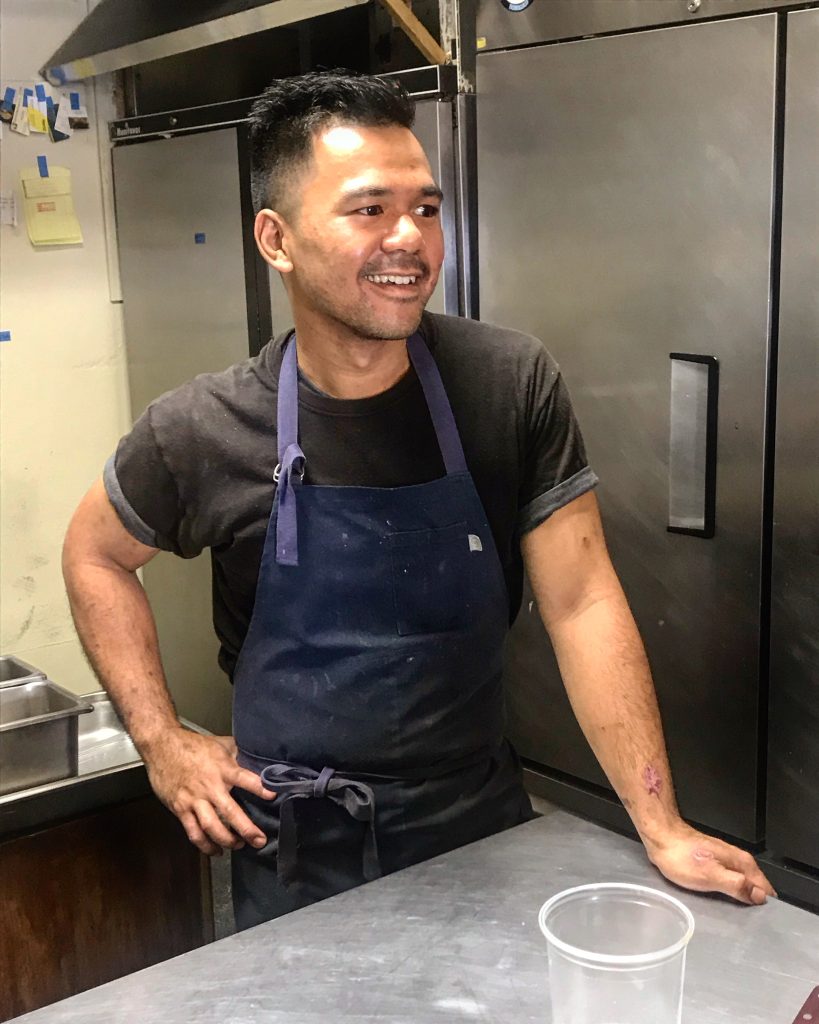 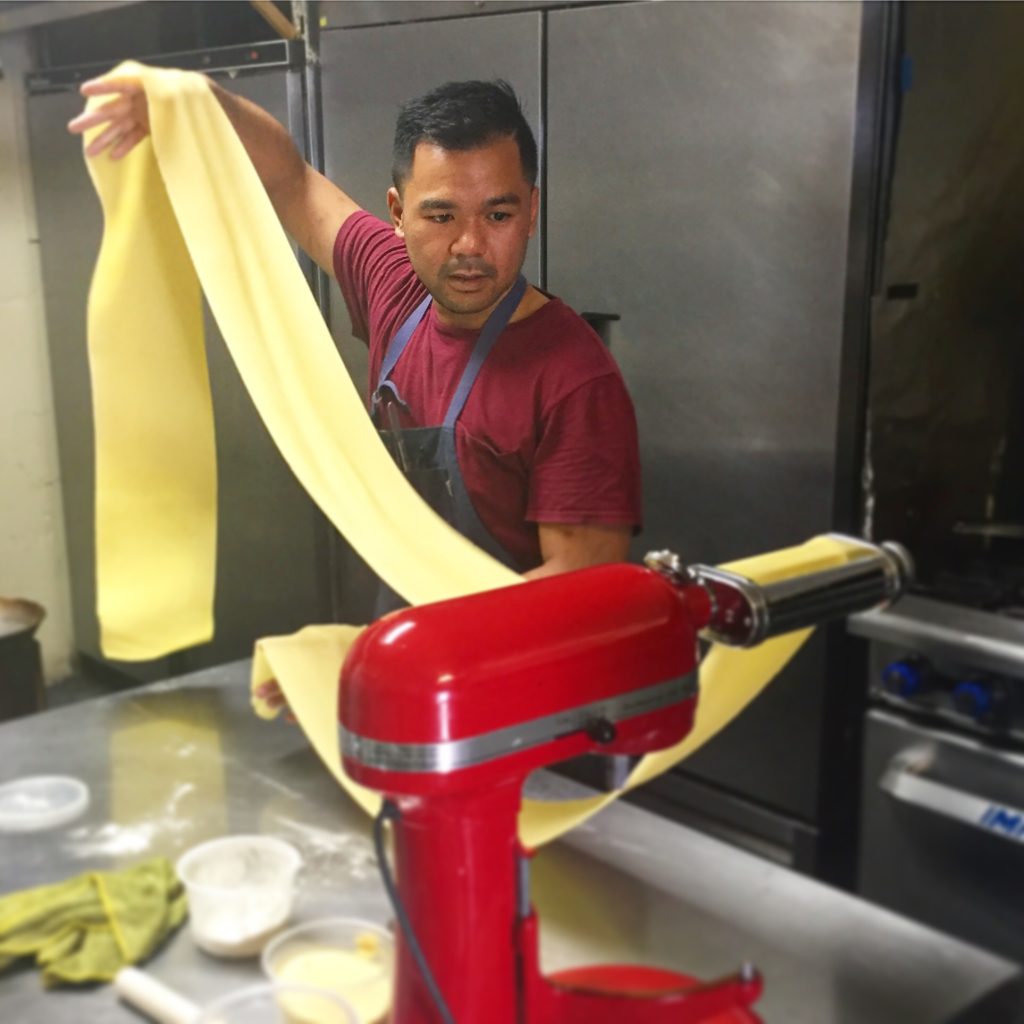 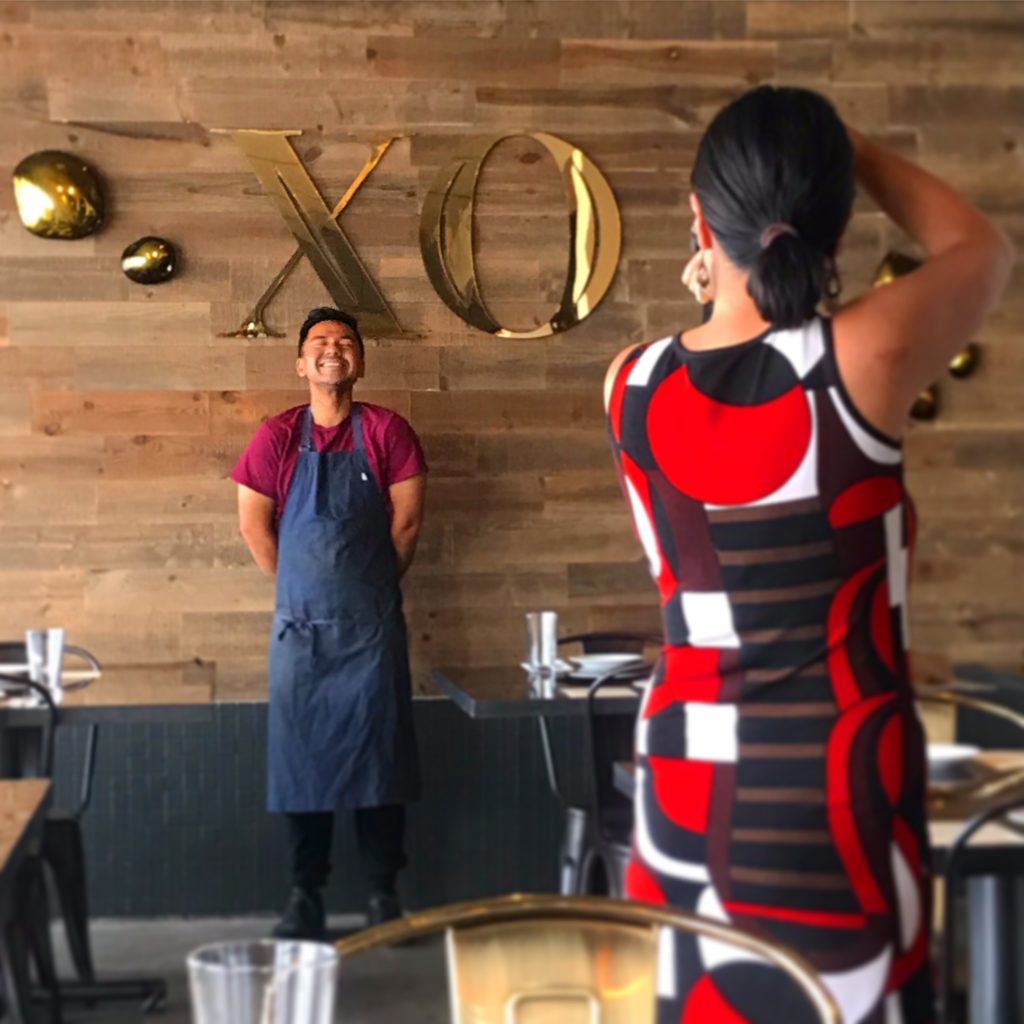